Over the last year, Dr Eilidh Cage’s final year project students carried out research looking at typical children’s attitudes towards autism. Eilidh’s previous research with autistic adults has noted that acceptance from other people may play an important role in their mental health. It is therefore important that we understand other people’s attitudes towards autism, and ultimately how we can improve the autism acceptance.

Psychology students Abby, Astrid, Becky, Emma and Nadia worked together to recruit 160 four to seven year olds to take part in their research. We wanted to look at attitudes in young children, as most published research focuses on older children. Is it possible to positively influence young children’s attitudes towards autism?

In the research, children heard a story about a character called Julia. We based this story on 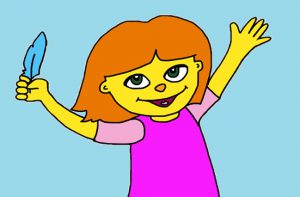 the new Sesame Street character of the same name. The children heard one of three stories – in one version, Julia was described as autistic and autism was explained (e.g. “Sometimes people with autism may do things that seem confusing to you, like flapping her hands. That’s just something she does when she’s excited!”) In another version Julia displayed the same behaviours but these were not explained and autism was not mentioned. Finally there was a version where Julia was described as a typically-developing child. Importantly, we used a ‘neurodiversity’ framework, where autistic people are seen as different, not less.

After hearing the story, children completed a range of fun activities. They answered some simple questions about their willingness to do different activities with Julia (their ‘behavioural intentions’) and they played a game where they could share stickers with Julia. We also looked at the child’s empathy and ‘Theory of Mind’ (their ability to understand others’ minds). With this research, we wanted to see whether the story they heard would influence the child’s behavioural intentions: if they heard an explanation about autism, would they be more likely to want to play with Julia? Would they share more stickers with her? We also wanted to know how things like empathy and theory of mind might impact on their behaviour.

Interestingly, we found that the story the child heard did not impact on their attitudes. Regardless of whether they heard a version where Julia was autistic or not, the children had positive attitudes towards her. We think this reflects the fact that children under the age of eight tend to be quite positive towards others. It might not be until after the age of eight that more negative attitudes are formed.

Overall, our findings suggest that educational interventions might be best targeted when children are around the age of eight. Developmentally, we know that age eight is when children start to be more aware of differences between themselves and others. Future longitudinal research would be beneficial to test whether an intervention at this age would have a positive and long-lasting effect on improving autism acceptance.